Start with resolutions for the year 2021

The fourth industrial revolution and its effects

What is the Sponsor Pro Plan 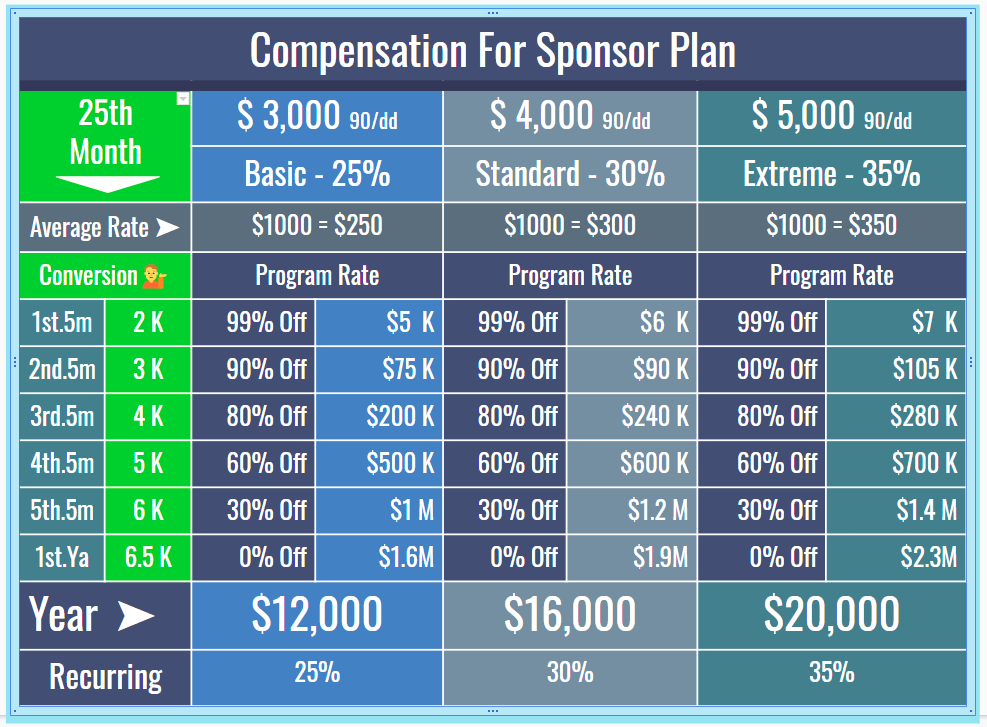 Important Notes
1- The Sponsor can choose one of two ways to reward:
a. Sponsor Pals
b, Sponsor Pro

2- As a Fundraiser, he can open a campaign with his name and photo. A link is also placed on the home page for your campaign

3- He gets a completely free paid account and will only pay for his subscription when he is earning 3 times its value.

4- He cannot have an account anymore when he completes the cycle, but he can go up to the Standard or Extreme level.

5- In all campaigns, he can open a Fundraiser, in which case he becomes an indirect Sponsor and will not necessarily appear on the first page of the campaign.

6- Your guests will have two great advantages:
They will receive a 99% discount for joining the Guest-Dreamer Program
They will be able to present their projects immediately from 5 dollars.

What is the Sponsor Pals Plan

It is a plan for fundraisers of campaigns as a regular user and friend of a member.

What is the Sponsor Pals Plan?

It is a plan for people with a certain social engagement. It doesn't necessarily have to be bloggers, YouTubers, Instagramers, Fan pages, etc.

A person can be invited to introduce DreamsWeek to their audience through an annual subscription to the Backer Plan. The features, in this case, have a slight change for the Sponsor. He can present his project, but he does not necessarily need to invest his funding in the US.

If invited by a Social Sower or someone from your Team, he must work on behalf of that Team. After that, he can run his fundraising campaigns every month for the benefit of all teams.

Under these plans, each Sponsor will earn 25% commission on Beginner, 30% on Intermediate, and 35% on Ultimate from each direct affiliate.

Sponsor Pals will earn a 30% commission on all their affiliates' renewals as long as their plan is active and their affiliates maintain their membership. If they do not have their plans renewed, they will be directed to the Free Plan where they will pay a 10% commission on all renewed subscriptions.Sponsors Pals earn bonuses until the fourth cycle.With this plan, the Sponsor can participate in DreamShare (DS) or SeedBonus (SB).
You are here:
Estimated reading time: 2 min
Was this article helpful?
Like 1 Dislike 0
Views: 289